World Youth Day group on their bikes in Peterborough 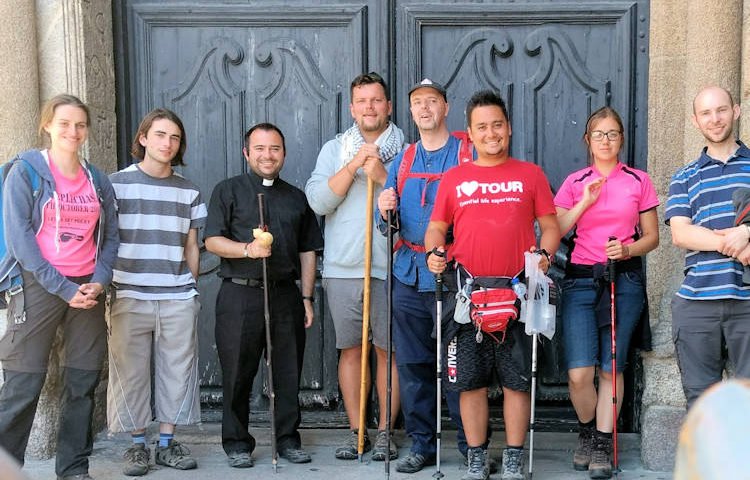 A group from the Diocese of East Anglia completed a ten-day Youth Pilgrimage walking the Camino in Spain to Santiago at the end of July. Pete Wygnanski shares his experiences.

Our pilgrim journey began at Poringland on July 23 with a special Mass concelebrated by Bishop Alan and Fr Luke. Having commended our pilgrimage to Jesus and asked the prayers of St James, we were treated to a welcome cup of coffee before Bishop Alan waved us off.

The journey to Stansted Airport was punctuated by the rosary and an all-important McDonald's stop on the way, after which we navigated the somewhat peculiar route from the parking space to the terminal and found ourselves rushing through departures to ensure we made our plane to Santiago, on time.

Precious time set aside for homeworkhad slipped away so it was only on the dauntingly long drive from Santiago to our starting point that my research began. Being repeatedly assured of the deactivation of roaming data charges in Europe, a Wikipedia article was loaded.

The Way of St James, one of the most important Christian pilgrimages during the Middle Ages, takes faithful from across Europe to the city of Santiago de Compostela, where, tradition tells us, St James’ remains were buried, having been brought by boat from Jerusalem to northern Spain. After a period of decline, due in part to the Black Death and the Reformation, the pilgrimage enjoyed a revival in recent times. Of all the many routes, theCamino Francsis especially walked, including the relatively short route commencing in the town of Sarria, – our destination. So far, so good. 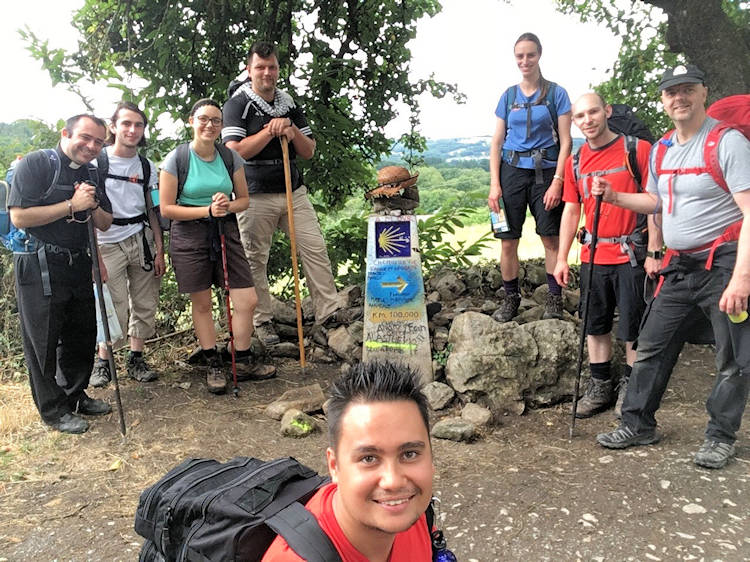 On arrival, the driver explained that he cannot go further as "something is going on' and the group discovered that Sarria had been converted into a cycling racetrack. For sure, getting one’s bearings at the start of the Camino is made more thrilling when it involves dodging cyclists jumping over cars. Eventually we found the hostel, colloquiallyAlbergue andcollected our pilgrim passport and first stamp, needed to obtain the coveted certificates of completion, colloquiallycompostellas,in Santiago itself. At the day’s end, we were all grateful to sit down with a glass of the localAlbarioand some excellent patatas fritas, colloquiallychips.

The next morning was one of quiet trepidation: the early start undeniably challenging as sleep was broken by the noise of cycling ramps being dismantled well into the night, and the nearest source of caffeine was uncertain, somewhere along the 24kms we faced that day.

The team assembled, and after a blessing, we set off. Caffeine was found, and as the sun slowly rose over the Galacian countryside, we came to know what it meant to walk the Camino. Walking sticks, wooden or otherwise, were purchased, stamps collected in our pilgrim passports, and leaky water containers abandoned. Cheerful greetings from seasoned walkers welcomed us on the way, whilst laughter, prayer and beautiful scenery served to mask that growing discomfort in feet and legs as we slowly made our way to Pontomarin, our first stop.

The following days seem to blend together in the writer's memory, and after some initial uncertainty, the group entered into the rhythm of the pilgrimage, and even when bodies were tired, we'd have a well-deserved and often side-splittingly funny meal, sleep the restorative sleep of the just, and be ready early the next day to continue. The kilometres, 100 to be exact, rolled past as we progressed through the towns of Palas de Rei, Azura and O Pedruzo, stopping at ancient roadside chapels for daily Mass. Faces we would see time and again became familiar like old friends, and we'd frequent numerous taverns for much needed water, ice-cream, and/or sangria, depending on the time and heat of the day.

All agreed, after lengthy debate in some cases, that on the last morning we would try to arrive in Santiago for the midday pilgrims Mass, which involved a5amstart. The guidebook informed us that we traversed a beautiful wood of eucalyptus by torchlight, and the rear-guard even managed mobile and nocturnal Morning Prayer from the Divine Office without incident or injury. On this occasion, the sun rose to reveal the crowds of pilgrims coming together in the suburbs of Santiago and we skirted the airport we had landed into. After a steep walk up to, and then down from,Monte do Gozoand a last coffee break, we faced the final ascent to the Cathedral. Against all odds, we arrived just in time for Mass, and after a compulsory group photo and quick lunch, all were keen to head to the final Albergue for a siesta before a noteworthy celebratory meal. Visiting Santiago itself could wait. 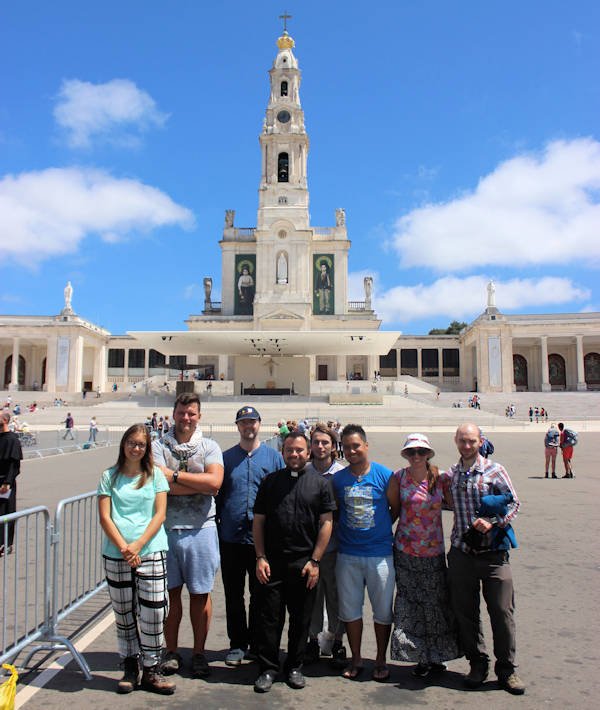 The next day we queued at length for ourcompostellas, received only after a rigorous check of the stamps gathered in one's pilgrim passport. We returned to the Cathedral to venerate the relic of the Apostle, and perused the local shops and market stalls for all the devotional items and gifts one might need. Eventually the time to catch the bus came but we went not to the airport; insteadthe group headed for a quick visit to Fatima. What with Fatima being so close and it being the 100thanniversary of the apparitions, we just had to go.

We crossed the border into Portugal by means of a beautifully scenic coach-ride to Porto airport, where we collected two rental cars for the onward journey. After a quick drive, highlighted in one of the cars by choice Monty Python and 70s musical aristocracy Toto, we arrived in Fatima in the evening. Circumstances meant Fr Luke said Mass for the group in his hotel room, which proved to be one of the most moving moments of the whole pilgrimage, as we came together in quiet, giving thanks for such a grace-filled week of friendship both new and old, recollection, prayer, and spiritual growth; all that pilgrimage is meant to be.

The next morning we enjoyed a longer sleep, and headed for the shrine in Fatima to attend the main international Mass alongside thousands of other pilgrims. The group reunited and fed, and having perused yet more shops, we returned to Porto airport. Not even the long wait for the delayed flight back to London could dampen the mood in the last hours together – a sure sign of a pilgrimage well done.

Pictured top, the East Anglian pilgrims on the Camino and, above, at Fatima.