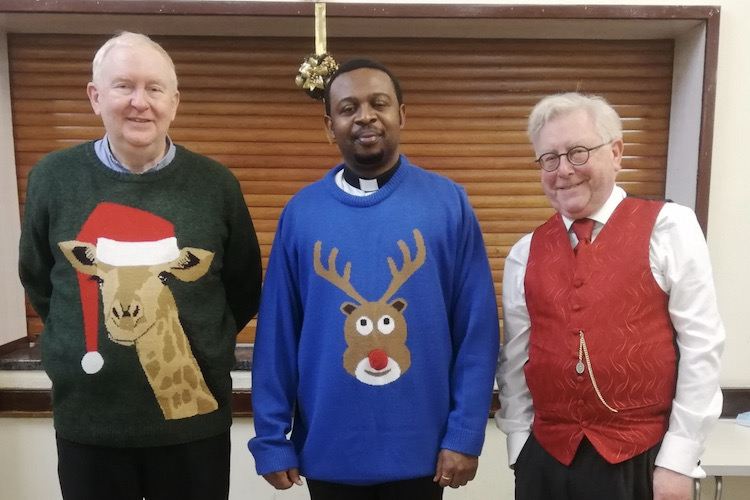 Priests and parishioners in Costessey, Ely, Acle and Framlingham have been putting on Christmas events to cheer the community and raise funds for those in need.

Fr David Ward, parish priest of Our Lady and St Walstan’s in Costessey, has performed a Christmas extravaganza to raise money for charity.

Fr David occasionally puts on a one-man show to raise money for charity. On December 10 and 12 he performed his latest offering, ‘This Time with Tinsel’, billed as ‘A Christmas extravaganza to rival Thursford’, in Costessey and Gorleston’.

Accompanied by Maestro Nick Walmsley at the keyboard, the show consisted of Christmas songs, monologues and poems, including ‘White Christmas’, ‘I Saw Mommy Kissing Santa Claus’, Joyce Grenfell’s ‘Nursery School Nativity’ and ‘The Night Before Christmas’.

Nick played a number of pieces including ‘God Rest Ye Merry, Gentlemen’ in the style of Bach and ‘Hark the Herald Angels Sing’ in the style of Rachmaninov. Enthusiastic (and sometime heckling) audiences joined in the fun and some of the singing.

The show in Costessey raised £610 for ‘Let the Children Live’, and the performance in Gorleston raised £514 for ‘East Anglian Children’s Hospices’.

The SVP Conference St Etheldreda’s Ely held a successful get-together for parishioners who have experienced isolation and loneliness due to the pandemic.

Transport was provided for those needing it. There was a Christmas theme, with decorations and refreshments. Those attending welcomed a chance to meet up with friends from church. Written and verbal appreciation was received by conference members who are hoping to make these social events a regular feature.

Music was provided by Elaine Brown and the Broadland Band. Carols ranging from ‘Once in Royal David’s City’ to ‘O Come All Ye Faithful’ were heartily sung by the packed congregation with prayers recited by Martin Greenland, Peter Glanville and Andrew King at appropriate intervals.

A collection was taken in aid of the homelessness charity Emmaus Norfolk and Waveney.

This year the CAFOD stall at Fressingfield raised a total of £1301.60, making another record. This figure includes the stall at the Christmas market, for which parishioners baked, made gifts and brought produce. The Christmas market itself made £350, which included money from the raffle, some donations, and £20 unbanked from the October sale.

Pictured above are Fr David Ward, Fr Alex Ibe (assistant priest at Gorleston) and Nick Walmsley. Below is the social event at St Etheldreda’s.