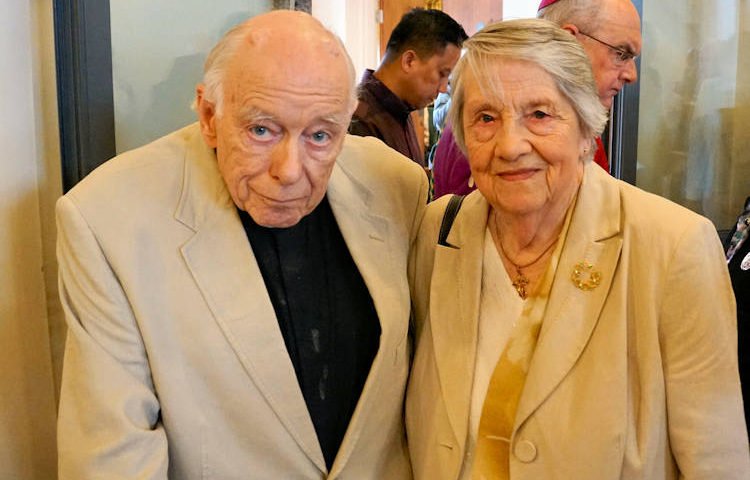 Fr Gordon Cordy, who had the unique distinction of being ordained in both of Norwich's cathedrals, died peacefully on January 21 at the age of88. Fr Michael Johnstone paid tribute in his homily at a Requiem Mass at St John's Cathedral on Friday, February 16.

From almost his earliest days, Gordon was enfolded in the Christian faith. From his earliest days of schooling at the age of eight at Norwich School – hard by the Anglican Cathedral ' it would have been difficult for Gordon not to have been deeply influenced by the faith it represents, stands for and proclaims.

But it doesn't just stand there as a presence ' or witness ' it is also the de facto School Chapel; and it is the place, where Gordon learnt to pray and to believe. Together with that ' and the encouragement of a Catholic-influenced chaplain ' the impression made on him must have been soul-forming.

Not that school, and Norwich's Anglican Cathedral, were the only influences on Gordon's incipient spirituality. For the whole of his family ' living in nearby Hingham ' was regular at services in the Anglican Parish Church, where elements of Catholic theology were also preached. There Gordon became deeply involved – as server, choir boy, Lay Reader – and even – when the elderly organist went absent-without-leave – the substitute organist.

In both places, he learnt of the promises that faith in Christ brought with it. These beliefs would stay deep in Gordon all his life.

So Gordon was brought up imbibing the richness of our faith, and knowledge of God's intimate love for him personally.

And these influences went very deep into Gordon, leading in due course, when already in his early 30s, for him to believe he was called to full, rather than simply part-time, ministry in the Church of England. And thus he set off for three years of theological study.

He cannot have found it easy after more than 10 years away from school ' and with a young wife and children – to return to academic work. He had already lived with God in his life. But the call to serve Him full-time to the end of his days, with all his energy, overcame whatever insecurity he may have felt at transferring to full-time study, and ultimately being an ordained minister in the service of his Lord. For he had found that his soul was thirsting for God.

So in his mid-30s he was ordained in the very cathedral that had been his school chapel, first as deacon and a year later as priest.

After a brief stint in Norfolk, he was drawn away for many years to parishes in Gloucestershire and Hertfordshire. Distance from the area in which he had his deep roots must have been difficult both for him and for his wife Mary.

However, even after their return to their roots in Norfolk ' life was to become a deeper challenge for Gordon. First, there was the wrench from their well-established position in the Church of England, and the decision to be received and ordained into the Catholic Church at the age of nearly 70 ' but it was a step that with his deeply-formed conscience he and Mary knew they had to take.

This, however, was only the prelude to an even more testing challenge. For it was not long after that that Parkinson's disease attacked Gordon.

What a trial those long years of pain and suffering, of occasional renewed hope, and then gradual worsening of his condition, were for both Gordon and Mary. But they knew that nothing could come between them and the love of Christ.

And, I'm sure, that Gordon accepted that trial fully and faithfully.

As a child, as a youth, as a young man ' as in old age, Gordon accepted God's will for him. And his faith did not fail.

Gordon's faith, nurtured throughout his youth, maintained and strengthened in middle age, remained strong through great trial, and to the end.

Fr Gordon was husband to Mary for 66 years and much loved by sons Colin, Timothy and Julian, daughters-in-law, eight grandchildren and nine great-grandchildren.

May his soul now rest in peace, as he awaits, in faith, for the Resurrection on that last day

Picture above are Fr Gordon and Mary Cordy in 2016.