CAFOD invites you to celebrate the Season of Creation 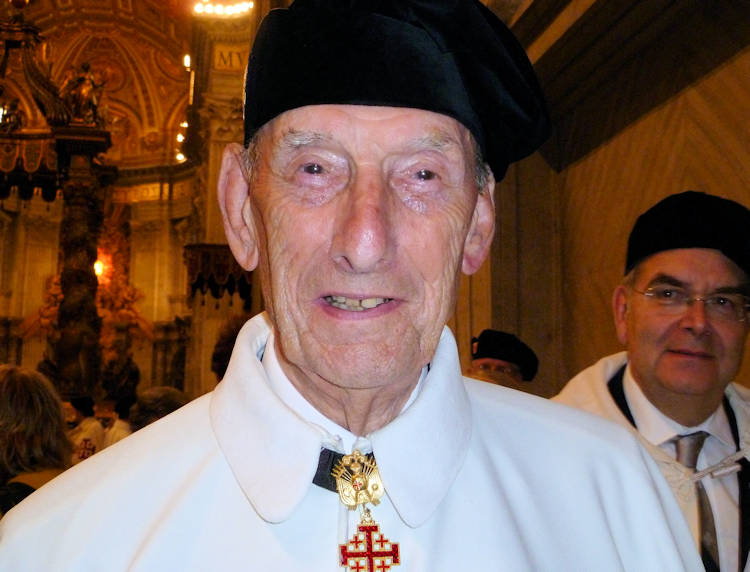 Tributes have been paid to well-known Norfolk Catholic Roger Pearson who was a man of faith, a Knight Commander, Catenian, Cathedral Treasurer, Reader and prominent charity and civic supporter.

Roger was born on September 25, 1931, and passed away peacefully on July 5, 2021 at the age of 89, at his beloved home in Norwich, where he had lived for almost 60 years. He will be sadly missed by wife Sally, his family and many friends around the UK.

The Requiem Mass at St John’s Cathedral in Norwich on July 22 was celebrated by Bishop Alan Hopes, eight priests and a deacon. Rev Canon Mark Madden KCHS gave the homily and His Excellency Michael Byrne KGCHS, Lieutenant of the Equestrian Order of the Holy Sepulchre – England and Wales addressed the assembly. It can be watched on the Cathedral YouTube channel.

Roger was a family man, a good friend and a person of deep faith who saw his service of people as a way to express his love for God. Roger was a Chartered Accountant in practice and started specialising in Insolvency in the early 1970s, retiring at the age of 72 after more than 50 years of working for the same firm.

Even more impressive though was his record of public service in which he gave freely of his financial and organisational acumen to a host of charities and public bodies in Norfolk.

He firstly married Olga in 1958 and after her death in 1983 he married Sally in 1990. They lived a very happy life, travelled widely and regularly welcomed family and friends to their home.

When Sally organised Fr John Drury’s Mission from 1997 until 2002, Roger supported and helped in any way he could, including counting all the monies raised by the diocese to help people in Ecuador. Many children in the diocese sent Smartie tubes filled with 1p and 5p pieces.

The Diocese of East Anglia raised more than £300,000 during the five years Fr John was in Ecuador, which provided housing, workshops/sewing rooms to give an opportunity of earning some money and help support families.

A medical dispensary was set up to provide facilities for the people there. Dining rooms were organised to feed approximately 900 people each day and two bakeries and lastly a technical college was built for which our diocese partly provided the money. Roger and Sally visited Ecuador three times and it was wonderful to see how our diocese helped Fr John’s parishioners.

Roger became a Catenian rather late in life, when he was 82, but got involved by being responsible for membership and attended as many meetings as possible even though he was very hard of hearing! He thoroughly enjoyed the companionship of the brothers at the Norwich Circle.

He was a Reader, Registrar for Marriages and was Treasurer at St John’s Cathedral, Norwich for 20 years.

At the age of 70, Roger was awarded a BA Hons degree in Divinity after five years of study.

Roger was a happy and contented man who lived by example, and we are fortunate to have known him and enjoyed his company.

Pictured top is Roger Pearson in his Knight Commander regalia and, below, with wife Sally.