Fr Sean and Dylan the dog are back with new podcast 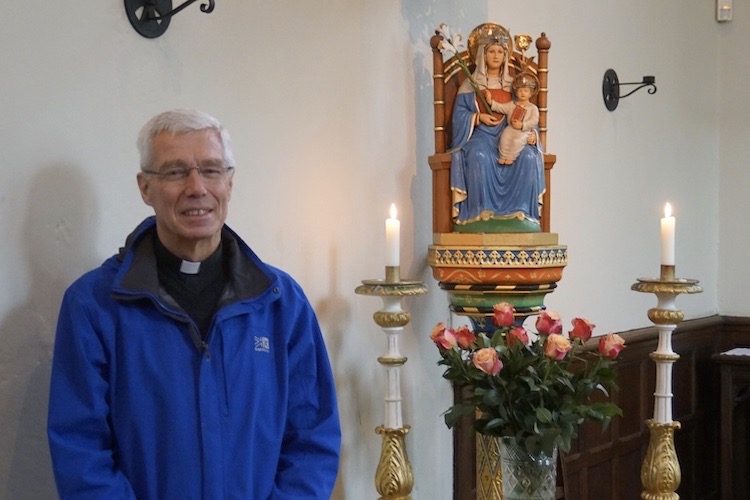 Seven weeks after his induction as Rector of the National Shrine at Walsingham, Mgr Philip Moger agreed to an interview, to help people in the diocese get to know him a little better. Eldred Willey reports.

“Thank you very much,” said the Pope. “Especially for the silence.” That was the parting tribute at Birmingham Airport from Pope Benedict XVI to Mgr Moger, who was Director of Liturgy for his visit to England. It says a lot about the priest. Although he is a master of liturgy, he is not a great blower of trumpets. An interview with him, like a papal visit, is punctuated by silences in which God is present.

Mgr Philip is devoting much of this first period in Walsingham to making friends with the locals, whom he has found to be friendly in return. “Not just at the Shrine,” he said. “But also in the shops in Fakenham and selling ice cream in Cromer.” And the scenery? “The hills are…not what you’d call hills in Yorkshire, but the coast is lovely.”

Mgr Moger grew up in the more contoured landscape of West Yorkshire, in the parish of St Mary in Halifax. After his mother sadly died when he was just five, his paternal grandmother, who was active in St Mary’s, stepped in to help with his upbringing. At the age of eight he first sensed the call to become a priest, and it returned powerfully in his late teens.

Four years working at Nat West Bank were never likely to draw him into a secular career, and in his early twenties he arrived at Ushaw Seminary – at that time a heaving centre of learning with 180 students and more than 20 priests on the staff.

After ordination in 1982 he was appointed assistant priest at St Urban’s parish, Headingley – a suburb of Leeds. So began a pattern of priesthood which always seemed to be offering the most diverse experiences and the widest insights into the mission of the Church. In the first parish there was school chaplaincy, a Sue Ryder home and a hospital for people with learning difficulties.

After Vatican II the Diocese of Leeds had begun experimenting with a pastoral centre – at that time a new concept. In 1985 it took over Myddleton Lodge, a recusant house in Ilkley, as a new base for the project. Mgr Moger was one of two priests who moved in to run it. For seven years he had the opportunity for brief pastoral encounters with a huge number of visitors.

In 1992 Mgr Moger took on his first role at Leeds Cathedral, as one of four priests responsible for liturgy. He returned in 2008, this time as Dean, a position he would hold for 11 years. Numbers had grown and the ethnic make-up had become more diverse. In this period music at the Cathedral thrived in an extraordinary way. There were 100 singers in various choirs, and an outreach to 2000 musicians in schools and choirs around the diocese. “There was a dynamism and richness in the music,” said Mgr Moger, “and especially a belief in the talents of children.”

More networking came when he was appointed Vocations Director, a role which took him on termly visits to the seminaries around England and once a year to Rome. In 2001 the role of Bishop’s Secretary was added. There was more parish experience at St Cuthbert’s in Bradford, which delved into the richness of Catholic history. The parish was founded by Mgr John O’Connor, the model for Fr Brown in the Chesterton stories, and both that church, and its mother parish, with which it merged in 2006, contained significant works by Eric Gill.

It was two days before Christmas in 2009 when Mgr Moger received the call from Bishop Arthur Roche asking him to take charge of liturgy for the visit of Pope Benedict XVI. “It was a wonderful experience,” he recalls. “The Pope depended utterly on the Holy Spirit and on other people to smooth the way for him. There was a calmness about his presence, and he did not go about checking microphones.” Like the Pope, he too remembers “the absolute silence in Hyde Park” which marked one of the key celebrations.

An unexpected call on his talents was role-playing the Pope himself, dressed appropriately in white, during the rehearsal at Westminster Abbey. It was an opportunity to exercise his natural rapport with Anglican leaders. As he walked in with Archbishop Rowan Williams he remarked: “You’re wearing your Vatican II ring.” “Yes,” replied the Archbishop, “Cardinal Murphy-O’Connor gave it to me, and tonight I’ll be wearing the ring which Pope Paul VI gave to Michael Ramsay.” Mgr Moger remembers Archbishop Williams as sympathetic and approachable. “He would have made a good parish priest,” he adds, which from him is probably the ultimate compliment.

So what of Walsingham itself? “It’s about the presence of Our Lady,” he said, “sharing her joy and meditating on her simplicity, and her openness to God’s grace. It’s something we’ll probably never get to the bottom of.”