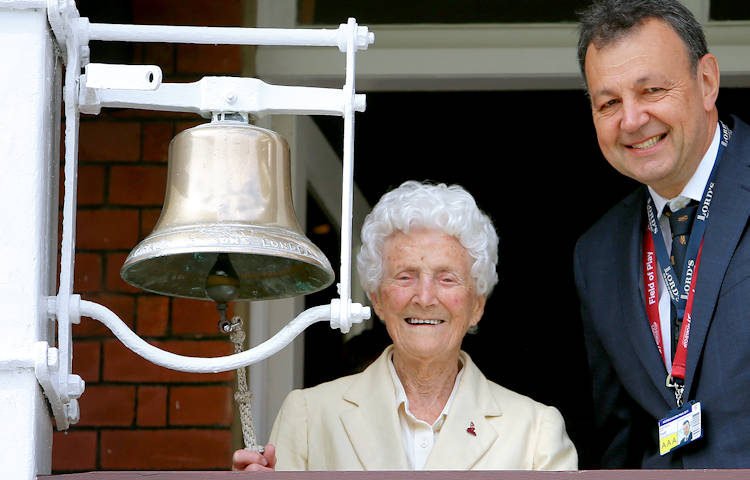 The ICC Women's World Cup Final at Lord's yesterday (July 23) was started by a bell rung by 105-year-old Eileen Ash, a regular at St George's Catholic church in Norwich.

Eileen was given the honour of ringing the traditional bell at the Bowlers' Bar to mark the start of play as she is England's oldest living former women's cricketer, who played seven Test matches for England either side of World War Two.

Born in north London, Eileen made her Test debut for England against Australia at Northampton in 1937 as a specialist bowler, and played three Test matches in all that summer, taking 10 wickets.

In 2011, she became the first female Test player to reach her 100thbirthday and, in the same year, was awarded Honorary Life Membership by MCC.

Eileen worked for the Civil Service from the age of 18 and was seconded toMI6during World War Two, and went on to work with the organisation for eleven years.

Sher retired with her husband to Norwich and took up golf until the age of 98. She is a regular attender at St George's and Our Lady Mother of God Catholic churches in the city.

Writing for the BBC,Heather Knight, England’s world- cup winning captain, said, "Eileen is easily one of the most extraordinary ladies I’ve ever met. She’s 105, does yoga every week and I’ve met teenagers who have a lot less energy than she does! It was amazing to hear some of her experiences of playing cricket for England."

The bell, which is located outside the Bowlers' Bar in the annexe to the Pavilion at Lord's, is rung to signify the imminent start of play, and it has come to be considered a great honour to be invited to ring it on the morning of a major match.

See a short video of Eileen ringing the bell.

Come on Eileen: Pictured above is Eileen Ash ringing the bell to start play in the ICC Women's World Cup Final at Lord's. Picture by Clare Skinner/MCC.