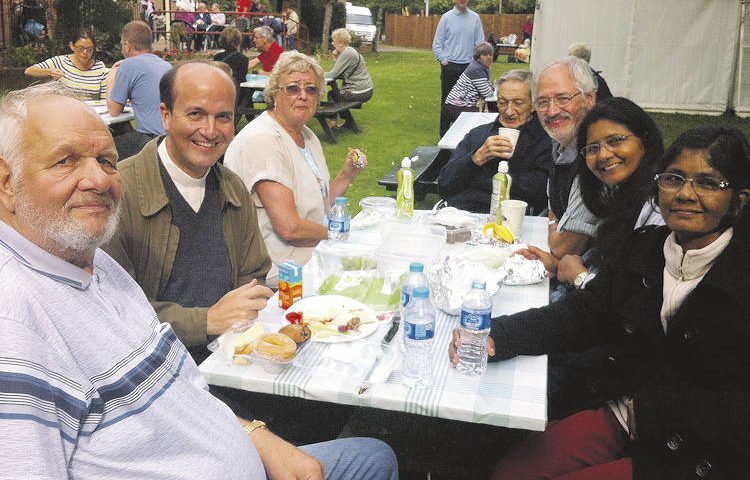 In July, Fr Erico Rodridguez de Mello Falcao arrived in East Anglia from Brazil to take up an invitation from Bishop Alan to minister to the growing Portuguese-speaking Catholic community in the Diocese.

The invitation was made while Fr Erico was providentially visiting the National Shrine of Our Lady in Walsingham on a pilgrimage while on a visit to the UK to see a relative in London. Bishop Alan made the invitation through a religious sister in Swaffham and Fr Erico accepted.

It took him a year to sort out all the complicated paperwork in his Diocese and get an entry visa to the UK. He arrived at the end of July, just in time to attend the funeral in Cambridge of Mgr Tony Philpot who, as a Portuguese speaker, was given a specific role to work with them.

"Many Portuguese-speaking people told me about Fr Tony and his holy ministry as a priest," said Fr Erico.

With just communicative English and little knowledge of Britain, Fr Erico plunged into Peterborough as his first base to find his way around the Diocese. He estimates that there are over 1,000 Portuguese-speaking Catholics in the city from Portugal, Guinea Bissau, Daman in India and East Timor. He currently holds two Masses a month there.

With the help of the Diocese, he soon got a car and some temporary accommodation at St Luke's (Peterborough), St Jude's (Whittlesey) and is now based at St Dominic's in Downham Market (West Norfolk).

Wherever he goes, he discovers more Portuguese-speaking families who have come to the UK from all over the world including also from Brazil, Mozambique and Angola.

"The Catholic population is small and spread around the countryside," said Fr Erico. "I have had a very warm welcome from them and I hope to help them to be alive in the faith. There is so much to do. First of all I am visiting parishioners to pray the rosary with them at home, once a week in this month of the Rosary. It is an opportunity to get to know the families and they spread the good news quickly."

His connections with the Portuguese speakers increase every day and he already uses email and Facebook to spread the word ' a website is planned to help with more regular communications.

Many of them told him, "Finalmente n£s temos um capel£o de lngua Portuguesa !" (At last, we have a chaplain for Portuguese speakers).

Pictured above is Fr Erico with other pilgrims from St Dominic’s (Downham Market) at the Feast of Our Lady Of Walsingham in September.