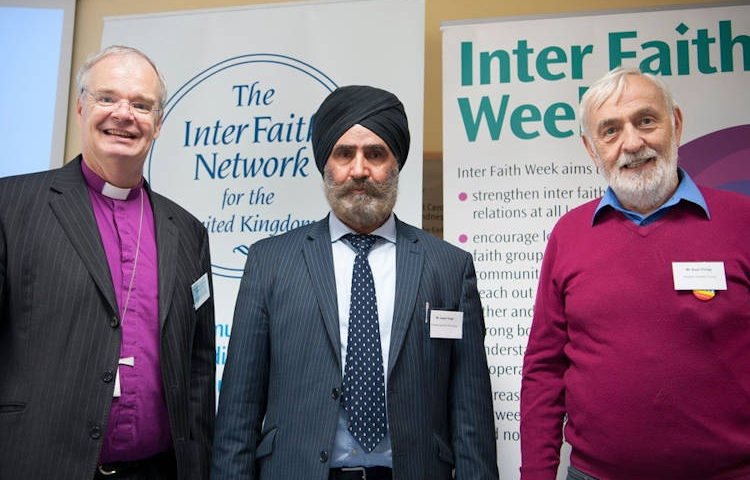 Peterborough hosted a nation-wide inter-faith meeting on October 19 and was hailed as a model of how various faiths group work together.The Diocese of East Anglia Inter Religious Group, and the Wisbech Interfaith Forum, was represented by Sean Finlay who reports on the meeting.

Over 100 delegates from allover the country converged on Peterborough to explore the topicFaith and Cohesive Communities. The day was introduced byRichard Atkinson, the Bishop of Bedfordwho is co-chair of the Interfaith Network.Jaspal Singh, chair of Peterborough Interfaith welcomed us to Peterboroughand declared that his city was a model of howthe various faiths got along.

Among the speakerswasLord Bourne of Aberystwyth, from the Department for communities and Local Government who has particularresponsibility forcohesion and Faith. Dealing with thetopic of the spike in hate crime following the Brexit vote in June, the speaker stated that recorded levels of hate crime hadnowreturned to pre Brexit figures. This assertionwas strongly disputed by members of the audiencewho stated thatthis issuestill deeply troubles some communities.

In the course of the morningvarious discussion groups were formed. I joined the one led by Dr Harriet Crabtree, Director of the Interfaith Network whichattempted toreconcile the two themes ofdiversity and commonality, iehow do wepromote and sustain our own particular faith group while at thesame time play our full part in promoting the links which bind agreater society together. It was encouraging to see howpeople of faithsee no contradiction between being faithful members of their own traditionand alsoservingjoyfully their fellow men,particularly those who are struggling. This last thread was given concrete reality bythe venue which isthe Deaf Blind UK conference Centre.

Jenny Kartupelis formerdirector of the East of England Faiths Council (sadly a victim of government cutbacks) and now with the Congress of World Faiths summed up the mood of the meeting, saying: "When faiths work together, hatred and division meet their greatest challenge and individual identities can flourish."

Sean is also involved in the Wisbech Interfaith Forum which will again be marking National Interfaith Week, from November 13 to 20. This year the event is being led by students from the Thomas Clarkson Academy on the theme: “Hey God, if you are out there, answer me”

They will explore this thread with a short drama, collage and discussion. The event takes place on Wednesday, November 16, from 6pm at the United Reformed Church, Castle Square, Wisbech PE13 1EH.

Pictured above are Bishop, Jaspal Singh and Sean Finlay.Picture by Myles Fisher from the Interfaith Network for the UK.