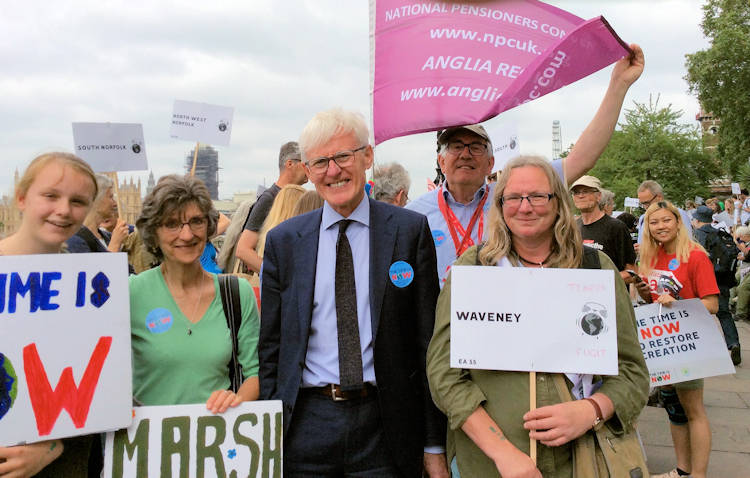 Catholics from across East Anglia were among over 12,000 campaigners on London’s South Bank on June 26 calling on MPs to urgently act over climate change, reports Chris Brooks.

Over 300 MPs came out to meet campaigners who included 1,500 supporters from the Catholic aid agency CAFOD. The lobby began with addresses from faith leaders, including the Catholic Bishop of Salford John Arnold and former Archbishop of Canterbury Rowan Williams and, gathering for a ‘Walk of Witness’ from Trafalgar Square down Whitehall, which was followed by an interfaith service.

Among campaigners were eight Waveney constituents, including Mairead and myself as Catholics from Lowestoft, three ladies from Marsh Maidens WI of Carlton Colville, a couple from Rumburgh and Mary a Quaker from Pakefield.

I attended as Chair of the Anglia Region Pensioners’ Association NPC, to which the Knights of St. Columba East Anglia Province 27 is affiliated, and as a parish supporter of CAFOD and Christian Aid at Our Lady Star of the Sea, Lowestoft.

We met up with the Norwich CAFOD group on the South Bank near Lambeth Bridge. The idea was for an outdoor lobby of MPs and we were pleased to chat to Norman Lamb who mingled with several Norfolk and Suffolk people.

Some of the Waveney people went to lobby MP Peter Aldous by invitation at Portcullis House afterwards and he suggested further possible meetings at home in the constituency.

When leaving to get an early train home for an evening Fairtrade meeting, I came across several MPs earnestly discussing in groups with their constituents from around the UK on the pavement, on Lambeth Bridge and in Victoria Park and chatted briefly to Rory Stewart and Hilary Benn whom I met in the park.

It was a fine sunny day in London by then with a wonderfully buzzing democratic scene – even including a large working model of a bumble bee with attendant insects like a carnival entry.

Climate Change is by far the most urgent inter-generational and international issue that involves us all and needs addressing globally as Pope Francis has said – and because Tempus Fugit – the time is now.