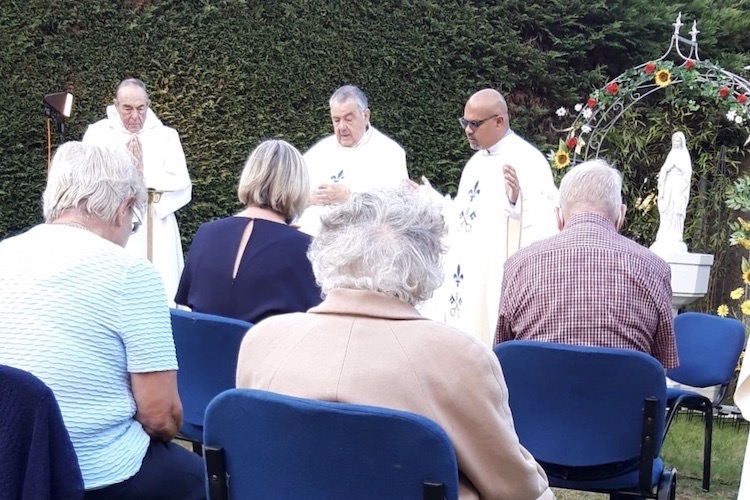 A dusty unwanted statue in a garden centre has become the central feature of a Carmelite grotto. Fr Paul Vincent OCD from St Mark’s Ipswich tells the story.

It is our Carmelite tradition that wherever we go we encourage the devotion to Our Lady. The Diocese of East Anglia gave us a beautiful Presbytery with spacious gardens.

When we saw people going to Walsingham and other shrines of Our Lady, we began to think about having a grotto of our own which would help people, where they could come daily and express their devotion through the rosary and novenas.

I and Fr Bineesh began to think about having a grotto in the inner garden. There was a baptismal font which was abandoned years ago, and we thought to ourselves that many people had been baptised in the font. We could not throw it away, and decided to make it the foundation of the grotto.

The next step was to get a statue of Our Lady of Mount Carmel. We ordered one from India through St Paul’s but we couldn’t succeed in bringing it from India and there was a great delay to the project.

As we were searching locally, it was Deacon Clive Brooks who said that there was a statue in one of the garden centres in Brantham.  We went there and saw the marble statue, which was covered in dust and unwanted by customers. One of the workers said that it had been there for many years and nobody wanted to have it.

We brought it home and cleaned it. We ended up with a beautiful, shining young Mary with a rosary in her hands. It is very similar to the statues of Our Lady of Lourdes.

When I shared the idea about the grotto project with the parishioners, they came forward to help, and we were easily able to finish the dream plan we had. All the work was done by our parishioners and the priests of St Mark’s.

We decided to bless the statue on the Nativity of Our Lady. I invited Fr John Williamson OCD from Gerrard’s cross, and we had a solemn Holy Mass in the Garden. After the Mass Canon Mathew George blessed and inaugurated the grotto.

Pictured above are Fr John Williamson, Fr Paul Vincent OCD and Fr Bineesh Elanjikkal John OCD blessing of the statue of Our Lady of Mount Carmel in Ipswich