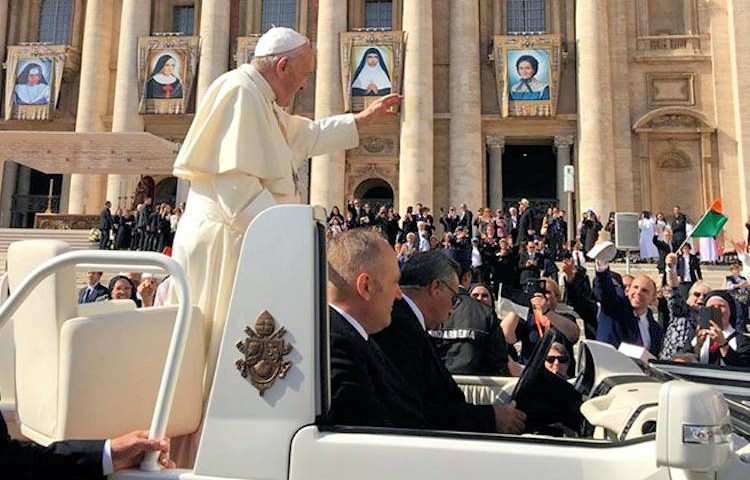 Three generations of a Thetford family attended the Cardinal John Henry Newman canonisation Mass in Rome yesterday (October 13) after a personal invitation from Pope Francis and they received a wave and a blessing from the Holy Father when one of the group tried to swap caps with him following in an ancient tradition.

Paul Gilbert, his mum Helen Gilbert and grandparents John and Henrietta Connolly attended the Mass at the personal invitation of Pope Francis, who wrote to them in July at the same time as giving John and Henrietta an Apostolic Blessing on the occasion of their 56th wedding anniversary

Paul said: Alongside the personal invitation from Pope Francis, we decided to go to the canonisation Mass because in 2010, I was the lead for the group that was attending the Beatification of Cardinal Newman in Birmingham which was celebrated by Pope Benedict XVI on the historic first official State Visit of the Supreme Pontiff to the UK. We have followed the process from then and it was lovely to see the whole process under both Benedict XVI and Pope Francis.

“The Papal Blessing, written on parchment, came from the Vatican along with a letter from His Holiness expressing his congratulations upon the wedding anniversary and inviting my grandparents to attend the canonisation ceremony.”

The family received seats very near the front in St Peter’s Square and Paul decided to use the occasion to try to swap caps with the Pope.

“A Papal Zucchetto is the small white skull cap that the Pope wears in everyday use,” explained Paul. “There is a very ancient Vatican tradition in which, if you purchase a white Zucchetto at the official papal tailor, Gammarelli, you can hold it up and the Pope, or the Swiss Guards, will swap yours for the one the Pope is wearing. Pope Francis frequently swaps his Zucchetto with people attending the general audience in St Peter’s Square.

“The Pope did in fact see us and waved at us but because of the time constraints and that he had to tour St Peter’s Square before he met the dignitaries from various countries, as he drove passed he blessed us and smiled as he passed by. It was a great moment for us.

“Once a Pope passes away, the Zucchetto becomes a relic which can then be venerated and can be used to help a cause for canonisation.”

Pictured above is Pope Francis giving a blessing to Paul Gilbert, who is waving his Zucchetto (also pictured above), and his grandmother Henrietta. Pictures courtesy of Paul Gilbert.