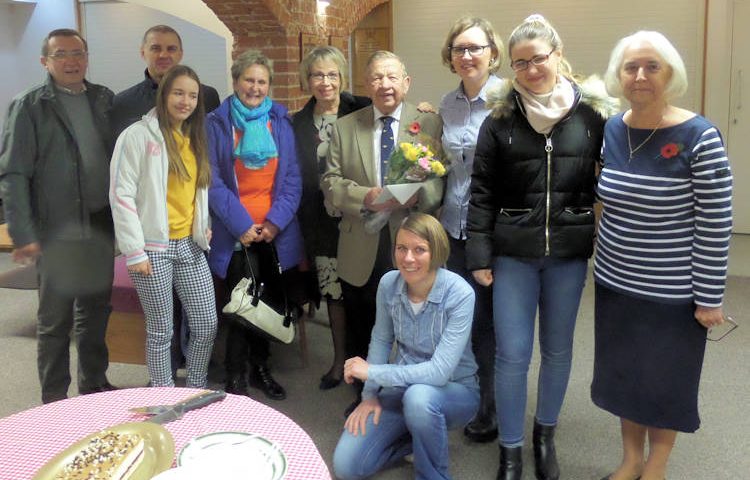 A Bury St Edmunds parishioner with an intriguing life story has celebrated his 100th birthday at a special Mass.

John Sanders reports: “It is rare for someone to be able to celebrate their 100th birthday at Mass, but the story of Mieczyslaw Frackiewicz, known as John Franklin, is rarer still.”

“John has lived in Bury St Edmunds for 70 years, having been a restorer of fine antiques and a maker of bespoke furniture.

“In 1939 his hopes of studying to become a doctor were dashed because of the outbreak of World War II.  He was dispossessed and displaced, being rounded up with other young men by the Russians and sent to a Siberian labour camp to work on building railways.

“Life in Siberia was harsh with extreme cold and little food. Prisoners slept in railway carriages with straw as blankets, resulting in many men perishing.

“In 1941 Stalin granted an amnesty to these Poles, allowing the formation of the Polish armed forces. In 1942 John was sent via Uzbekistan, Persia (Iran) and Africa in order to reach the UK.  His memory of this long journey has faded, but he recalls boarding the boat in South Africa and arriving in April 1943 in Blackpool.  The Polish recruits were processed and John elected to join the Royal Air Force.

“In August 1944 he was assigned to Squadron 304, initially as part of the crew flying Wellington bombers over Germany and later undertaking reconnaissance missions focussed on anti-submarine warfare.  He was decorated for his actions.

“At the end of the War it was clear that it would be dangerous for Polish people to return to Poland due to the country being under Soviet influence.  As a result of the Potsdam agreement the boundaries of Poland were redrawn. The territories in the east became part of Belarus, Ukraine and Lithuania. The area of Grodno in Eastern Poland where John was born became part of Belarus, and remains so to this day.

“The 1947 Polish Resettlement Act allowed people connected to the armed forces to stay and work in the UK. John was discharged from the RAF, intending to undertake an apprenticeship. It was at that time that a discrepancy in his date of birth was discovered.  All of his documents issued by the Polish Forces and the RAF recorded his birth date as 7 November 1921.

“Facing an uncertain future, he was obliged to adopt this incorrect date of birth and his new name of Michael John Franklin in order to move on with his life. He held on to the hope that his faith as a Catholic would one day resolve matters.  He had lost his family in Poland, had no original documents, could not return to his homeland and had to make a new life for himself in a foreign country.

“He was demobbed, gained British Citizenship and settled in Bury St Edmunds.  He forged strong connections at St Edmund’s Church and was responsible for making a processional cross.  His marriage to Pam led to them having two daughters, Linda and Stephanie.

“It was not until May 2019 that he received a visit from an attaché from the Polish Embassy in London who wanted to hear about John’s history and his experiences in the Polish Forces and British RAF. He was advised to apply for his service records which he had not previously seen – these showed that his true birth date was 3 November 1919.

“At Sunday Mass on 3 November 2019 Fr Mike Brookes briefly recounted John’s background before the choir led the congregation in the singing of ‘happy birthday’.  Afterwards, a further surprise awaited John. Accompanied by his daughter Linda and son in law Tony, members of the Polish community gathered in the Crypt, sang ‘Sto lat!’ and presented flowers and cake.

“He had reached his century two years earlier than he had dreamed of.”