A life-changing year for Jess with Ignite team 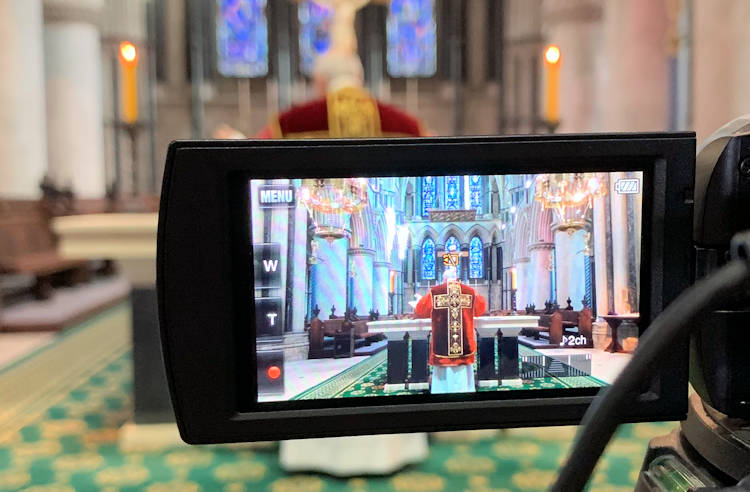 Tens of thousands of Catholics have watched live streamed Masses from up to 20 churches across the Diocese of East Anglia over Easter, after churches were closed to physical congregations due to the coronavirus restrictions. Keith Morris reports.

Some online congregations for individual Masses were up to two or three times larger than congregations would normally have been, while most broadcasts at least matched usual numbers. There were however a lot less Masses celebrated publicly overall than usual across the diocese.

Bishop Alan Hopes said: “It has been an extraordinary time and to know that so many people have been watching and have received reassurance and hope in this difficult time is a source of great blessing for those of us who have celebrated the Easter Mysteries in such straightened circumstances.”

At the Cathedral of St John the Baptist in Norwich (pictured above), over 15,000 views were recorded over the five main Masses and vigils from Palm Sunday to Easter Sunday, representing a 300% increase. However, only two Easter Sunday Masses were celebrated online rather than the usual five.

Music director, Daniel Justin, who masterminded the coverage on YouTube, said: “We’ve been really pleased with the evangelistic nature of our streaming, allowing many more people to take part in the liturgies in the Cathedral. We have had messages from a lot of parishioners who have been too infirm to come to the Cathedral in recent years, who have found being able to attend Mass virtually a source of great comfort. We will be looking into regular streaming once the cautions are lifted, as this is clearly something which is of benefit to many.”

Live streaming has been a big hit at Sacred Heart & St Oswald in Peterborough, where the Good Friday Liturgy of the Lord’s Passion was watched 3,000 times and other Masses received up to 950 views with weekday Masses attracting over 300. Fr Arockiya Seelan Poobalan said: “Along with our parishioners, people from many other countries are joining in as well, including from India, Dubai and the USA. Lots of positive feedback has been received from parishioners and others.” 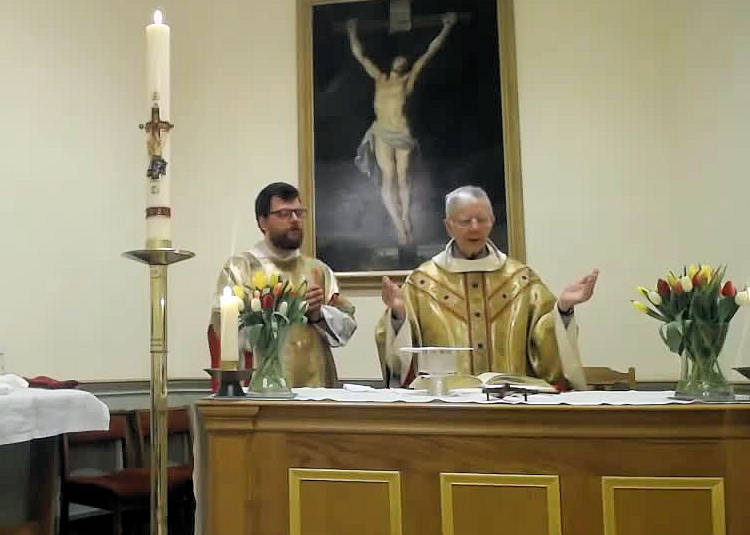 At St Edmunds in Bury St Edmunds (pictured right), over 6,000 online views have been recorded over the past three weeks.

Parish priest, Fr David Bagstaff, said: “We were delighted to know that so many parishioners and others have connected with us over the Easter Festival and we have received very many positive comments.  It has obviously been important to parishioners that they could see their own priests, but parishes where streaming has not been possible have also advertised those parishes which are streaming.”

At St Michael’s in Huntingdon, Mass figures were roughly comparable, but the big surprise was around 75 participants for morning prayer, which is not normally celebrated, said Fr Philip Shryane.

“The live streaming is going well and is much appreciated by many parishioners and others around the world; trusting God is one thing, trusting technology is proving less reliable though. Personally, I would be struggling to say Mass every day in an empty church without the live stream, at least I know some people are with me in spirit which makes sense of celebrating a community act of worship like the Mass alone. I am very grateful for the technology to do this and so be able to continue to serve the parishioners in this way.” 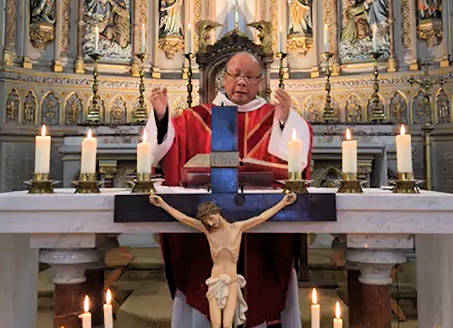 At Our Lady Star of the Sea in Lowestoft (pictured right), Marie Fairish set up a parish Facebook group on which Masses were broadcast.

Although not without technical difficulties, Marie said: “It was very simple to get set up: all we needed was the parish priest, his phone, a stand and Facebook. Once we had live-streamed a couple of daily masses, Fr Paul started to add background music via his laptop and parishioners such as readers and cantors stepped in and started to send him recordings to add to the live broadcasts.

“He even worked out how to add church bells! The musicians recorded hymns and added vocals, with a hymn sheet posted to the page for Easter. We also had a guest priest from America preaching the homily on Palm Sunday and Easter Sunday.”

At Our Lady and St Peter in Aldeburgh, Fr Tony Rogers said: “Ours is a small parish, but the benefit  of live-streaming has surpassed all my expectations. Our normal Sunday attendance in the parish over three masses varies between 150-180 and during the Sacred Triduum and on Easter Sunday, each of the liturgies had over 200 people watching at one time or another.

“We have regular viewers in Ireland and Canada, and it has been a wonderful way of ‘meeting up’ with people I haven’t seen for a long time. One parishioner came out of his house as I was going on a walk, and said that he had never been to Mass so often in his life.

“Because of poor wi-fi in the church, Mass comes from the stairwell of my house – and people seem to appreciate the intimacy of the setting. While not the same as being physically present at Mass, it has been a wonderful way of sharing the Good News on a daily basis, and being reassured at my end that others are praying with me, as feedback has indicated.” 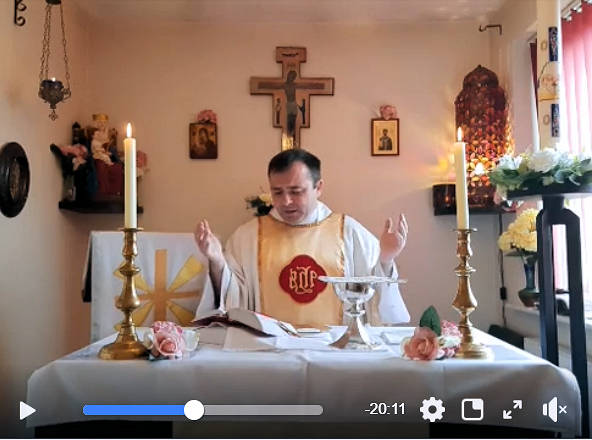 At St Thomas of Canterbury in Brandon, Fr Luke Goymour (pictured right), said Sunday Mass numbers were around the same online as would be expected physically but for weekday Masses numbers were least double and sometimes triple the usual numbers and the total views is now close to 4,000.

“I have also been contacted by two people who have ‘returned to Mass (and are moving towards faith of sorts) over Facebook,” said Fr Luke. “One comment was ‘Thank you, that was my first experience of Mass in eight years’ and another parishioner wrote about daily Mass: ‘Thank you, it’s the most important 25 minutes of my day’.

“From my point of view, it has been a godsend, especially the fact that many of my regular parishioners can message each other before and after Mass – it keeps a virtual community together.   Knowing who is watching and praying along with you makes a huge difference as well. Knowing that we are in spiritual and ‘virtual’ communion with one another and with Christ is very encouraging.

“Overall it has been a positive experience and provided a platform to engage my parish and keep connected in these challenging times. The fact that it is reaching people who have been away from the Church is also exciting. Several of my elderly and typically housebound people have asked if we can continue streaming Masses after we return to physically meeting in church. I can’t wait to return to normal, but I am finding this digital mission a useful and at times exciting tool to reach people in this time of social isolation.”

Canon Eugène Harkness at Our lady and the English Martyrs in Cambridge, said: “I was able to tot up the numbers viewing our liturgical celebrations on YouTube from Palm Sunday to Easter Sunday inclusive and it came to a staggering 4,070. I am amazed! This is something we should and indeed must continue.”

Over 600 views have been recorded at Our Lady and St Charles Borromeo in Wisbech reports Fr James Caulfield: “I am very heartened by this as for each device may have one person or it may be a family of several people watching it.”

All Souls in Peterborough recorded over 2,000 online over views over Easter and Fr Adam Sowa said: “People loved it we invested in good professional equipment for livestreaming facilities.”

St Mary’s in Great Yarmouth recorded 1,400 views, around the same as the expected physical congregation and St George’s in Norwich, has been receiving up to 100 listeners to its daily Evening Prayer podcast.

Our Lady of the Annunciation in King’s Lynn is now live-streaming via its YouTube channel. and each Mass has received well over 100 views so far.

Before the lockdown only two churches in East Anglia provided live streaming of Masses, now more than 19 churches are doing so.

The Catholic National Shrine at Walsingham has been live streaming for several years and during Holy Week its three different constant live-streams received 225,000 visitors from 124 countries around the world.

Click here to see a guide to live-streamed Masses across the Diocese of East Anglia.